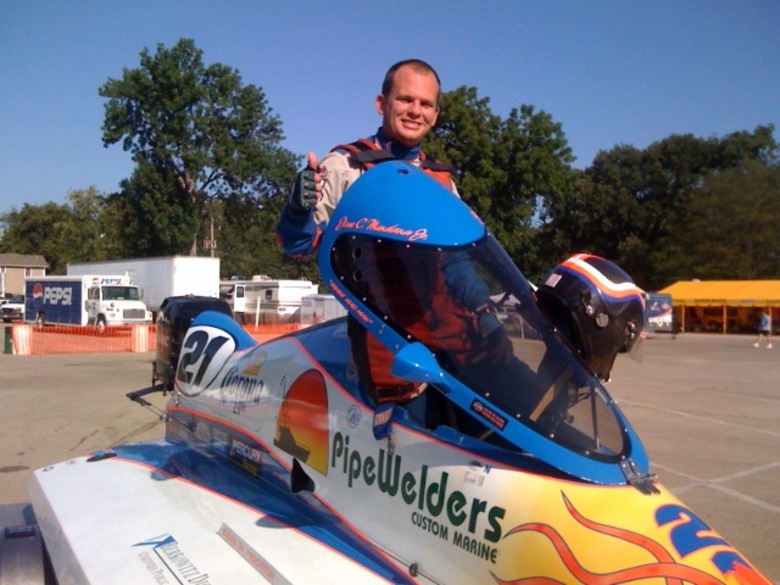 Jose Mendana Jr., a fourth generation driver and three-time world champion, has emerged as one of the most consistent and durable drivers in powerboat racing who knows what it takes to win races and championships. After four seasons of racing SST-45 and one season of SST 120 (Formula Two), Mendana Jr. is now a full-time Formula 1 driver for Mendana Enterprises with his younger brother as his teammate.

Mendana Jr., knows what it's like to taste victory and reach domination. His life has revolved around racing. The oldest son of former driver and now crew chief Jose Mendana Sr., is a native of Portsmouth, VA. He has lived in Miami, FL since the age of four. He grew up not only watching his father compete, but deciding for himself that he wanted to be a winner too. At the age of sixteen, Mendana Jr. strapped himself into his first competitive machine, a Formula Lights, and began his path to success and fulfillment of his dreams.

The early start to his racing career was met with good fortune. He was his first regional event in Florida at the age of seventeen. After enormous amount of testing and racing of regional events, Mendana Jr. filled in his for his father full-time on the national scene in 2004. Mendana Jr. immediately made his presence known by qualifying in the top five for every event in 2004. In his first two national seasons, Mendana Jr. was known for his consistency after achieving nine top five finishes in just fourteen starts. After rounding out the top three in the championship standings in his first two seasons, Mendana became the new face of the SST 45 with pure dominance in the following seasons. D riving the #21 Pipewelders Custom Marine machine, Mendana Jr. went on to win the 2006 points championship. In addition, he also claimed the regional and divisional championships along with the amazing 2006 world championship. Mendana Jr. joined his father in the record books as the first father-son duo to win in the SST-45 division. The 2006 season marked great accomplishment for the young man as he was inducted into APBA's prestigious Hall of Champions.

The 2007 season encountered more dominance by Mendana Jr. as he again won the World Championships, divisional championship and added a national championship to his resume. 2007 also was also the season when Mendana Jr. made his Formula Two (SST-120) debut at the Bud Light St Louis Grand Prix. In an attempt to win the World Championships in two separate classes in the same season, Mendana Jr. ran double duty at the end of 2007. While recapturing the 2007 SST-45 World title, Mendana Jr. also ran for the Formula II World title in just his second start which ended with a very respectable eighth place finish.

In 2008, Mendana Jr. a rookie in Formula Two competition ran very strong with tons of misfortune. Mendana Jr. qualified in the top two for six of the seven events while finishing with two podiums and three top fives. Again while performing double duty, Mendana was able to again recapture for the third straight year the SST-45 World Title and second straight National championship. There is currently a six race winning streak by Mendana Jr. in the SST-45 division of all races in which he has entered. Mendana Jr. nearly won the St Louis Grand Prix before a penalty ended his chances while leading and a blown engine cost Mendana Jr. his first national championship in Formula Two while again leading. Mendana Jr. was also in contention for the Formula Two championship at the season ended race in Naples, FL. After suffering a mechanical failure while running in the top three, Mendana's Formula Two title hopes came to a close. Mendana Jr. was again inducted into APBA's Hall of Champions for 2008 and 2010.

Mendana Jr. fulfilled a dream in 2008 by competing in the US Formula 1 Powerboat Tour divison driving for teammate Shaun Torrente. Mendana Jr. made his debut in Bay City Michigan and led half the laps in the second qualifying heat. He qualified a very impressive fourth position for the main event in his very first time in a Formula One boat. Running amazingly in the top five, Mendana Jr. encountered electrical problems which dropped him off the pace. Mendana Jr. then made his second start in Formula One a couple months later in Algonac, MI.

Mendana Jr., made the decision late in 2008 to form and drive for Mendana Enterprises and take the reigns of his brand new 2009 #21 Grand Prix Hull. The 2009 season marked the rookie season for Mendana Jr. at the Formula One ranks, the highest level of competition in power boat racing where he captured the Rookie of the Year title.